The cassetta is the most fundamental frame design, on which practically every other genre or pattern is based.  It is usually translated, lazily, as a 'box' frame, which doesn't describe it at all. It could be more accurately called an 'encasing' frame, like a casement window; a rectangular border with a very simple cross section, usually with a flat central frieze surrounded on each side by mouldings.

It has very early ancestors; the geometric borders used in Egyptian tomb paintings to contain figurative scenes look very like a two-dimensional cassetta, with different widths of line, and a decorative central panel. So do the stylized leaf and flower borders on Greek vases, and both these early types of 'frame' help to focus attention onto the painted scene, and to separate it from the real, exterior world.

The cassetta can also be seen as an element of an architectural façade; for example, part of the entablature of a Greek or Roman temple, where a frieze (decorated with figures, like the frieze of the Parthenon or with carved ornament, as above) runs between decorative mouldings. It is also very similar to a classical doorway or window which has, of course, other resemblances to a picture frame, since it opens onto a different world from the one where the spectator is standing.

When wooden frames began to be made in the 12th or 13th century for altarpieces, the cassetta was the simplest and most effective form that they could take. Simone Martini's Madonna and Child, c.1326, Metropolitan Museum of Art, is one panel of a five-part hinged altarpiece, each section of which still has its original gilded cassetta frame, with painted and punched ornament in the frieze. The more elaborate Renaissance altarpieces also incorporated inner borders (very like the cassetta) around the painting and within the main structure: for example, in Bellini's polyptych of San Vincenzo Ferreri, 1464-68, Venice.

As secular paintings began to be produced along with religious works (portraits, and then history or mythological subjects), the cassetta was the earliest form of frame to be used. Since it rapidly achieved a very sophisticated form in 15th century Italy, we shall look at the Italian cassetta first. 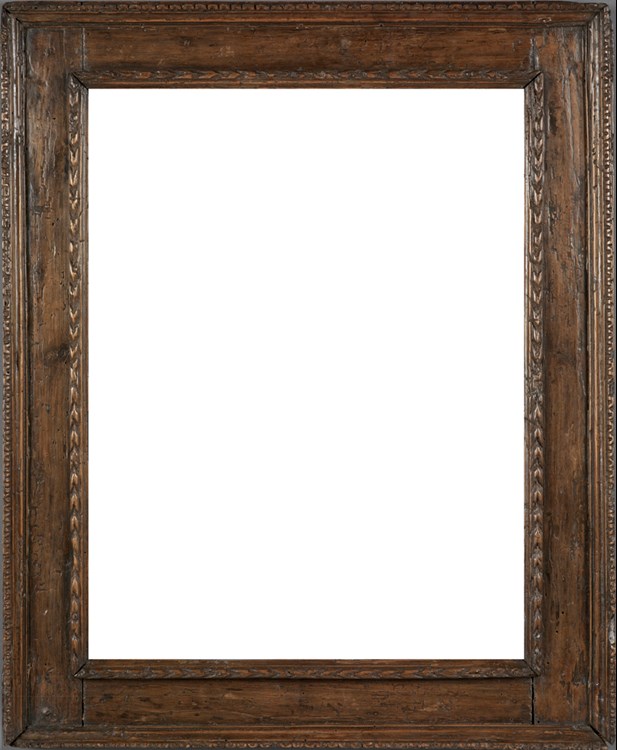 Here, for instance, is a walnut frame, with no decorative finish at all - just a small carved moulding outlining the frieze. A cassetta like this was simple and straightforward to make - but this didn't mean that it need be plain, or lack decoration. Every variety of technique imaginable was put to use on the mouldings and the central field of the frieze; and the collection of Paul Mitchell can provide examples of all of these. 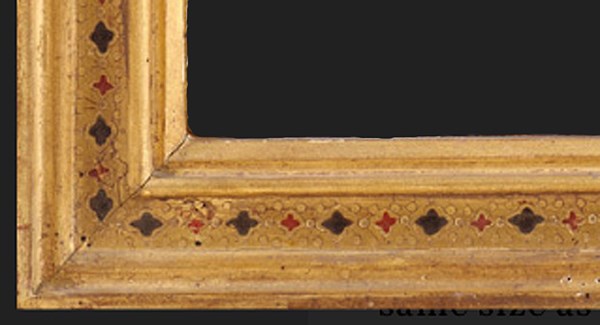 An example is punchwork, which is used to provide texture and an added coruscation of light on a gilded surface: it can be seen clearly on the frame of the Simone Martini Madonna and Child (above). Punchwork is a technique which involves stamping the gessoed and gilded surface with a metal punch, the end of which is tooled to produce anything from a small dimple or a plain circle to a flower, a star or a quatrefoil. It was very popular in Siena, Martini's birthplace, where the gold ground of panel paintings would be elaborately punched, creating haloes, decorative borders and ornamental braid on painted costumes. It spread out from Siena, and remained highly popular - particularly in Italy - for decorating frames, giving them a shimmer of light and animation. 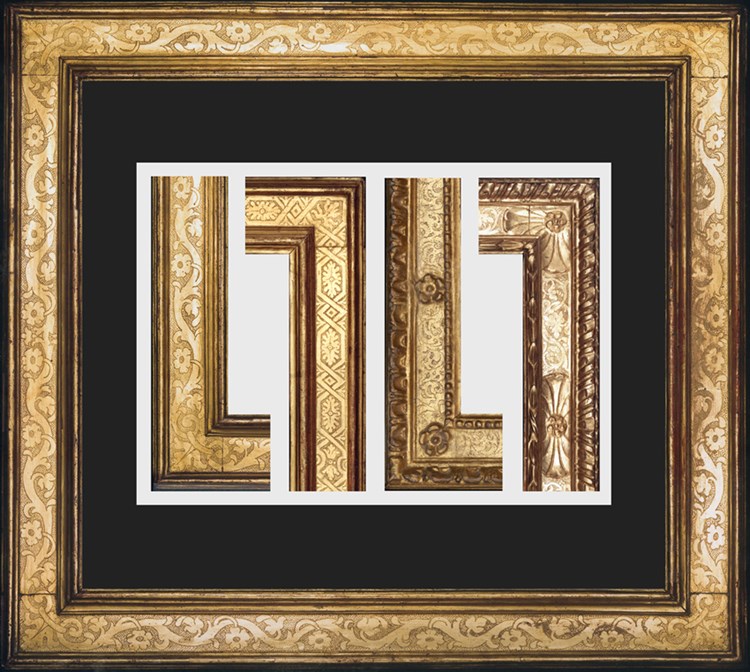 On the frieze of the frame above it has been used to produce an effect like a brocaded fabric, in which the undulating branches of leaves and flowers remain in flat, burnished gold, and the background is punched with tiny indentations. The pattern appears to move and dance in the light, as the spectator moves in front of the frame; this helps to animate the painting inside the frame. Further examples of punchwork can be seen on the frame corners inside; here punching is also combined with carving, to produce even greater richness and emphasis. 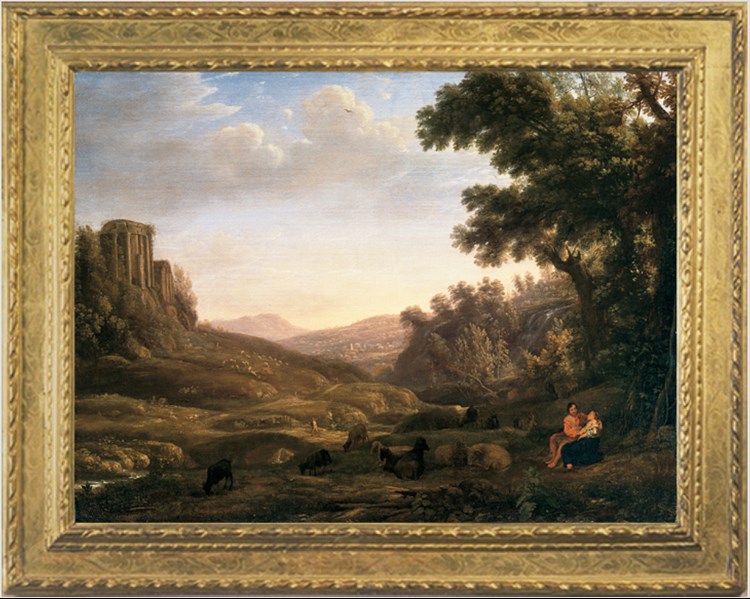 This particular punched cassetta dates from the 17th century, and was chosen from the Paul Mitchell collection to frame a landscape by Claude in the Hood Museum of Art. The leafy brocaded decoration, picked out again in punchwork, reflects the soft luxuriance of the Italianate landscape, and the movement of light on the textured and burnished gilding echoes the late afternoon light as it illuminates the drifting clouds. This frame is of the right period for Claude, and underlines his empathetic connection to his adopted home in Italy. 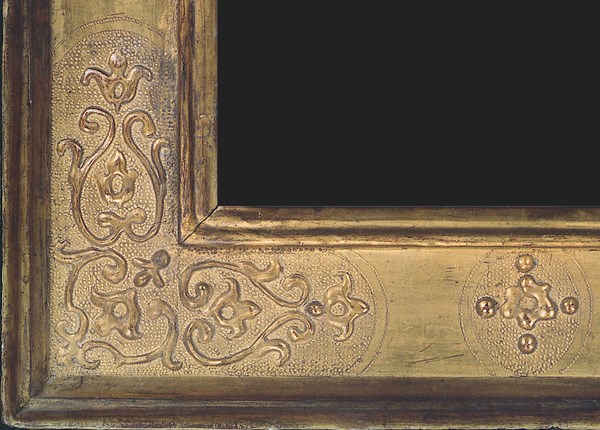 Another early technique used for ornamenting frames is the use of pastiglia. As its name suggests, this could be a stiff paste, made of gesso and size and pressed into moulds, the cast decoration then being glued to the frame and gilded. A runnier version of the same mixture could also be applied with a brush to the frame, in a freehand design which could be built up with further layers as the pastiglia dried. The first process gives a crisper finish; the second, a very soft and fluid look. The example above vividly illustrates this 'dribbled' decoration, which looks - when gilded and burnished - like molten gold. 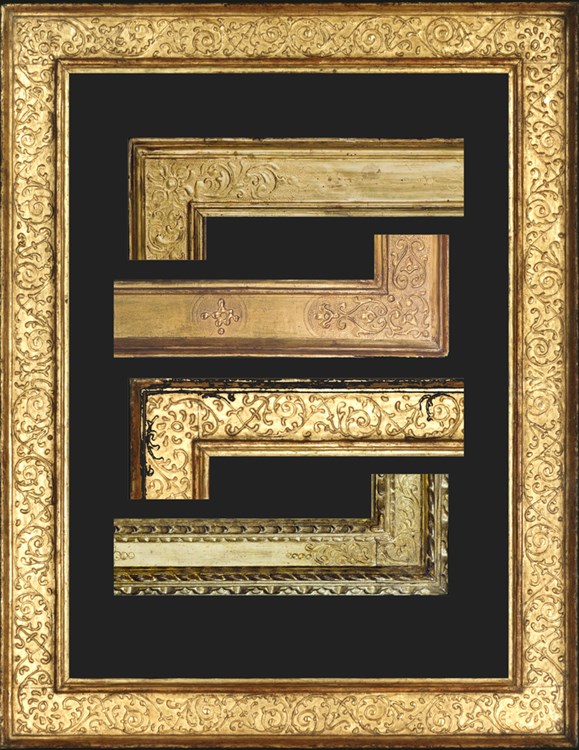 Further examples of pastiglia decoration, combined with punchwork and carving, can be seen in the frame above. All these form part of the Paul Mitchell collection, demonstrating its scope and variety. 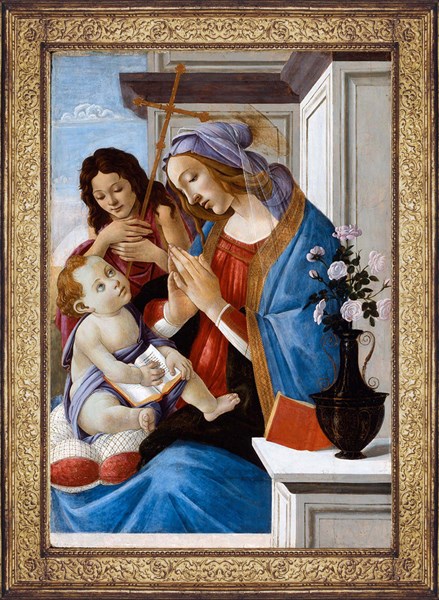 A very similar pattern to the outer frame holding other examples of pastiglia decoration was chosen as the model for a Botticelli Madonna & Child. This very beautiful 16th century cassetta was of the wrong size for the painting, but the wide frieze covered with gently-scrolling foliate decoration harmonized so perfectly with the poise and serenity of the painting that a replica was produced by highly skilled craftsmen in Paul Mitchell's workshops. The corners are decorated with roses, the symbol of the Madonna, and lily buds (also her emblem) are twined through the foliage. The very shallow profile of the cassetta opened up the composition, and the flowing calligraphy of the pastiglia ornament echoed the braid of the Madonna's robe, as well as the vase of roses by her side.